Making The Case For A Shared Stadium

February 09, 2010
Raiders and 49ers fans will forever be locked into a location rivalry. The clean-cut fans from San Francisco and the rough edged fans from Oakland.

Most people greet any shared stadium idea with very negative sentiment. I am not sure why, because Raiders fans really have one of four options:

I'll outline below why these are the only options. 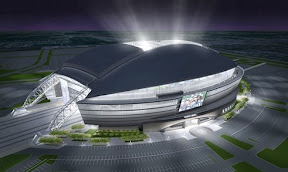 I'll ask this question: What about the Giants and Jets? Do they share less hatred for the other team than that brewed in Northern California?

That doesn't seem as likely. Jets fans and Giants fan share equal disgust for each other. In fact, the Jets have long been second class citizens at Giants Stadium because the Jets are were only minority partners.

With the new stadium comes a 50/50 partnership and the ability to customize the stadium for each team.

Gone are cheap banners and in are High Definition screens and other lighting. This lighting will change colors, blue for the Giants and green for the Jets, which will reflect each team’s desire to individualize the look of the stadium.

In today's economic climate, especially that of California, it will be near impossible for the 49ers or Raiders to secure the $950+ million required to build a state-of-the-art stadium. If one team does manage to secure a new stadium deal, it will set the stage for the other team to relocate. I'd be surprised if one city is foolish enough to use tax-payer dollars during a budget crisis to build a stadium used just 8 days out of 365 for football. Do you think a second city would do it also?

The way these things are made economically feasible to cities is a promise of an increased traffic to local businesses and therefore increased tax revenue. Will 80 days of games over the next ten years be enough to cover the cost the city? Not likely.

Double 80 games to 160 games over the next 10 years and add in a few concerts per year and you might have a shot. You can't just have the stadium in a location that doesn't support the local city's economy.

A good example of how a stadium should support the local economy is that of AT&T park. China Basin has been built up around the park and now dozens upon dozens of local bars and restaurants are filled to the max during the summer months and the city has benefited.
The disgust for a shared stadium is understandable, but also not wise. The NFL is headed into a new era with the upcoming CBA, and the salary cap years could be gone. The owners with economic power to pressure the commissioner don't care much for smaller market teams and the fans behind them. Oakland is just such a market. Roger Goodell recently said the NFL would have a hard time supporting NFL teams that didn't have attendance of at least 40,000 fans.

The Raiders losing certainly has a lot to do with the attendance figures, but the Raiders have struggled to sell tickets since they moved back to Oakland in 1995. I believe the average ticket price to attend a Raiders game is also a league low, although I am still searching for that information.

The Raiders are at the bottom of the NFL pecking order and the NFL is likely to adopt rule changes that no longer require the teams at the top to share.

This makes it so much more important that the Raiders focus on building a new stadium, with more luxury boxes. Corporate dollars and creating a place fans want to go, even when the team may be struggling, are a top concerns.

The image of the Raiders is not overly favorable in America these days. The Raiders are the team America loves to hate. That isn't an image that corporations are always willing to partner with, but a new stadium and cateringmore to families could change that.

The whole point is the NFL is a business and the Raiders are currently the worst one in the league. See the Forbes list of NFL team values. Raiders also dead last.

The two things the Raiders could do to change their status as the NFL door mat is to partner with the 49ers and build a new stadium, the second is take some PR lessons and start to use the mystique more as a promotional tool and less as an organizational philosophy.

While one of these two things might be impossible with Al Davis at the helm, the Raiders can partner with the 49ers to build a new stadium even with Davis around.

With careful planning not a single 49ers logo or red and gold could be seen at the stadium during a Raiders game. Vice-versa for the Silver and Black at the 49ers games.

The best possible scenarios are either a new location where the stadium could be built along with plenty of commercial development or the current Oakland site with good access to Bart, AmTrak and the Freeway. The Oakland idea has recently been tossed around as 49ers President Jed York's plan B and Amy Trask seemed open to the idea as well.

The NFL has also secretly been pushing for the two teams to share a stadium. It only makes sense for two teams in the same region to a nuetral party.

One idea for a non-Oakland stadium project that could sell a city on a stadium would be to make the stadium itself with a roof that closes, not because it is needed in Northern California, but because it would enable the stadium to host concerts year-round.

If Santa Clara approves the 49ers stadium bid, the Raiders will either be on their way to a new location, stuck in the dregs of the NFL in regards to stadium and also in revenue, or will end up in the future moving in the with 49ers after the fact and be like the Jets from 1984-2009 until 2040.

So I asked this question Raiders fans:

Because folks, it will be one of those four options.

I'd much prefer a 50/50 split to the other three options.

If you want to bet that the bay area will approve to build two $1 billion stadiums in the next five years, I'll give you 1000:1 odds.