It is worth noting, Kelly stands to make about $4.5 million in 2010, having already collected all but $300,000 in bonus money. He will also now be bound to the Raiders until 2014 with only base salaries. He could be easily cut in future seasons. 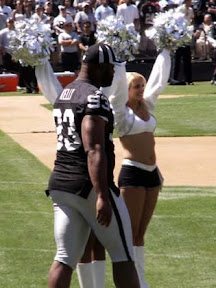 The Raiders get much for those millions they paid Kelly as he recorded just 5.5 sacks in the two years since signing the deal.

All of this adds up to Tommy Kelly being a lightning rod for criticism. Some of the criticism merited and some not.

Instead of waste away as another member of Al Davis’ 2008 spending spree, Kelly has remained a professional. After playing the season at nearly 350 pounds, Kelly has trimmed down to 315.

Kelly looked quick and punishing as a 295 pound defensive end. Moving him inside to the pass rushing three-technique tackle position was logical, but after two seasons the Raiders are pulling the plug.

Kelly will move to the nose tackle position vacated by the release of Gerard Warren. Warren was much like Kelly in that he was much better rushing the passer than stopping the run.

Desmond Bryant, who played nose tackle last season, will see time as the backup at the three-technique to Richard Seymour and newly acquired John Henderson will backup Kelly at the nose.

Typically the nose tackle position is played by players upwards of 330 pounds. Henderson fits that mold perfectly, yet it is Kelly getting first team reps.

What is clear, the defensive tackle spots will be an ongoing rotation of players in 2010. Perhaps keeping the lineman fresh is just what the doctor ordered for the Raiders sickly run defense.

Despite a change in role, Kelly put in the work to trim down and has taken the position change in stride saying, “I’m strong enough and tough enough to play the nose, so I’m not even worried about it.’’

Fans were immediately excited when Lamarr Houston was drafted and when John Henderson signed, hoping that the moves would put an end to Tommy Kelly starting. Yet Kelly remains, trimmer and leaner starting along-side Richard Seymour and the young defensive end Matt Shaughnessy.

If the Raiders are more successful stopping the run in 2010, much of the success will be given to first-round draft selection Rolando McClain. If it is unimproved or worse, all that blame will be placed upon Tommy Kelly. Neither characterizations are accurate.

An improved run defense should be attributed to the entirely new front seven. Kelly and Seymour remain, but playing different positions. Shaughnessy and Trevor Scott ascended up the depth charts last season to end the year as starters. The remaining four were additions.

Don’t forget Kelly when distributing credit when the Raiders run defense is improved. Although he may never justify the contract, he might just turn a few critics into believers in 2010.