Washington is a registered sex offender and is required to register for life.

He was convicted of having consensual sex with his 15-year-old sister, when he was 16. Seven years ago.

This is no doubt a disgusting act, for which Washington pays a price. He will carry a stigma for the rest of his life.

Below is an excerpt from the original report from SportsFanLive:

"The fact that the offense was committed as a juvenile means the odds are in his favor. According to a report published by the National Center on Sexual Behavior of Youth, adolescent sex offenders have a 5 percent to 14 percent chance of sexual re-offenses.

Dr. Fred Berlin, Associate Professor of the Department of Psychiatry and Behavioral Sciences at the Johns Hopkins University School of Medicine, and founder of the Sexual Disorders Clinic, believes that unlike adult offenders, juveniles are “highly treatable” and “rarely go on to become adult offenders.”

According to Berlin, who has treated juvenile sex offenders, in some cases a young offender must simply accept the consequences of his mistakes and learn how to behave differently in order to move on. Other times, more intensive treatment, such as medication, is needed to ensure they are not a threat to others, or even to themselves.

Berlin has been an advocate for shielding juvenile sex offenders from the harsh stigma and even humiliation that accompanies placement on local and national registries.

“We want adolescent sex offenders to go on and become productive members of society, but they can’t do that if we’re constantly throwing barricades in front of them,” Berlin said.

Berlin cautions that each individual must be evaluated on a case-by-case basis. But he says the fact that Washington’s wasn’t a forced act, that there was just a one-year age difference, and that he has not had any reported run-ins with the law since, suggests that as long as Washington has had the appropriate counseling, “the likelihood is very high that he’s going to go on and live a good, responsible life."

Washington hasn’t had any issues in the six years since the act. While some will find it hard to move past Washington’s horrible act, he has been given chances and hasn’t squandered them.

Washington now has a son and was admitted to and played for a very conservative Christian university in Abilene Christian University. I would know, it is my alma-matter. 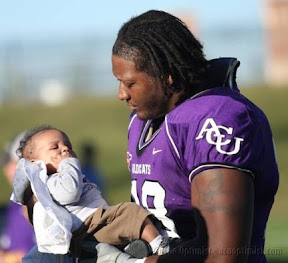 (Photo courtesy of ACUOptimist.com)
Washington isn’t a child molester, he didn’t force this act and he has the full support of his ex-coaches and the university.

A CNBC article got Washington’s agent, Vann McElroy’s thoughts on the matter, "We spent hours of our time, providing letters, testimonials from people to tell this kid's story," McElroy said. "It isn't like he's some pervert hanging around in the bushes. He's a good kid who screwed up, who since then was accepted by the board and admitted to one of the most conservative colleges out there."

McElroy is an ex-Raider, having played with the team in Los Angeles from 1982-1990. He is also the agent of Stanford Routt.

For a guy who registered the best broad jump at the 2010 NFL Scouting Combine and didn’t allow a sack during his college career, Tony Washington deserves a shot in the NFL.

He has owned up to his mistake and faced all the consequences. In my opinion, don't punish this kid for a mistake he made when he was 16.

Al Davis, if you read this, give your ex-player a call and give Tony Washington a chance.