Raiders Have FORDitude In Win Over Chiefs

November 08, 2010
When someone had to step up and make a play for the Raiders, it wasn’t stars Nnamdi Asomugha, Zach Miller, or Louis Murphy. They were all inactive on Sunday.

It was rookie fourth-round pick Jacoby Ford who did the damage. With the Raiders down 10 and desperately needing a score to stay in the game, Ford raced 94 yards for a touchdown on the opening kick of the second half. 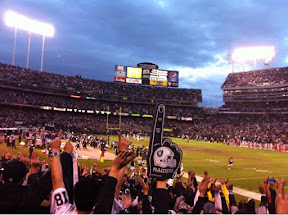 It was only moments later the Raiders would tie the score after recovering a fumble at the Kansas City 34.

Ford came through again when the Raiders needed someone to make a play, ripping a would-be interception away from Brandon Flowers that would have sealed the game. It set up the game-tying field goal in the closing seconds of regulation.

He wasn’t done. After the Raiders defense forced a three-and-out in overtime, Ford streaked under a 47-yard bomb from Jason Campbell and set up the game winning field goal.

It wasn’t expected, but he burned one of the best cornerbacks in the NFL repeatedly and in many different ways.

Darren McFadden was the other offensive weapon, accounting for 114 total yards. His opportunity to score a touchdown was vultured by offensive tackle Khalif Barnes.

Jason Campbell recovered from a terrible first half to have a respectable game adding a layer of uncertainty to the pending quarterback controversy.

The offense couldn’t get anything going in the first half and the Raiders punted four times, lost a fumble and fumbled the ball away.

The second half was much different, with drives ending with two touchdowns, three field goals, one missed field goal and just two punts.

Stevie Brown played well, having replaced the Tyvon Branch, who left the game with a concussion. Jeremy Ware played well as the outside corner in nickel situations.

Rolando McClain didn’t finish the game with a hip pointer and was replaced by Ricky Brown.

Rookie left tackle Jared Veldheer handled Tamba Hali one of the top ranked pass rushers so far this year. Veldheer limited Hali to one sack and two quarterback hits, a victory for such a disruptive player against a rookie tackle.

The penalties were out of control, but they merit mentioning simply because of their volume. 27 total for 240 yards and the Raiders accounted for 15 of them for 140 yards.

The noise level in the coliseum was deafening and the fans really stepped up to give the Raiders a boost when they needed it.

What was impressive about this win was the Raiders were not playing with a lead or able to do everything they wanted on the ground. The Raiders struggled, but managed to grind out a victory in comeback fashion. The biggest question coming into the week, can the Raiders win if they are forced to pass? The answer was yes, if they throw it near Jacoby Ford.

Troubling statistical indicators could still haunt the Raiders down the road. Outside of penalties, the Raiders were three for 12 on third down and one for three scoring in the redzone.

The passing game isn’t as good as the stats might indicate. Passing teams convert on third down and score in the redzone.

The Raiders managed to win without many of their top players and now have two weeks to get healthy for the Steelers.