May 13, 2010
Nnamdi Asomugha is a lock to start when healthy. No surprise there, but what about the rest of the secondary?

Chris Johnson is penciled in as the starter opposite Asomugha, but he was picked on last year. Quarterbacks completed 64% of passes thrown at Johnson. He was burned for six touchdowns and quarterbacks had a staggering 101.2 rating throwing at Johnson. Johnson did defense 12 passes and intercept 3 others, but it is clear Johnson takes a lot of risks.

Is the risk worth the reward? 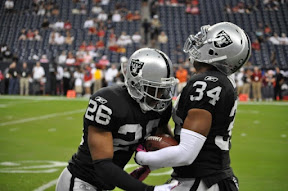 The Raiders only other options at cornerback are rookies and Stanford Routt.

Routt was actually worse than Johnson in limited snaps. Quarterbacks had rating of 123.0 while completing 29 passes out of 41. That is 70.7% completion percentage! He also gave up two touchdowns.

The Raiders have one good option: move Michael Huff to cornerback.

Huff was a corner prospect coming out of college. Many teams thought he was best suited in coverage to cover up his inability to tackle. Raiders forced a square peg into a round hole the first few years, with Huff playing strong safety.

Finally, Huff was moved to free safety, but he hasn’t really developed into a good safety either. He has his moments and many people forget that he had a great start to the 2009 season, but was less than spectacular the rest of the way. His saving grace is his coverage skills. His run support has improved, but is still well below average.

Why not put Huff’s coverage skills to good use and move him to cornerback? After all, quarterbacks only completed 45.7% of passes thrown at Huff with no touchdowns for a rating of 34.2. Huff picked off three passes in his first two games and that was it, but he continued to be effective in coverage with 11 passes defended.

With Huff out of the picture at free safety, it opens up the free safety position for Tyvon Branch.

Branch had a very good year in both run coverage and pass coverage. He would need to take a developmental leap from defending tight ends to the slot receiver, but he is more than capable with his speed.

2009 second round selection Michael Mitchell was actually very good in limited snaps in 2009 and could be primed to see significantly more snaps at strong safety. To accomplish this, the logical move would be for Branch to slide over to free safety.

It is expected for a second round selection to be a starter by year two and it looks like Mitchell could be ready.

Mitchell wasn’t forced into coverage much during his rookie season, which makes this area of his game a bit of an unknown. He was thrown at just six times.

This recommendation probably comes a year early. Logically, Mitchell will probably be used more as a hybrid linebacker with the coaching staff easing him into coverage responsibilities slowly against the tight end. They would do the same with Branch, having him slowly start to cover more slot receivers as the 2010 season goes on.

This is something to monitor during camp. Expect Branch and Mitchell get a lot of work in coverage and watch closely for Branch defending slot receivers or lining up as the free safety on the weak side.

*Special thanks to Profootballfocus.com for the great stats.

- Check out the links section for a video link to ESPN’s 30 for 30 Straight Outta L.A. directed by Ice Cube.