September 02, 2010
When it comes to making the back end of a NFL roster, the most important thing is often how well the player can play special teams.

When attempting to predict the 53-man roster, it is important to break the ties by watching who plays on the kick and punt coverage units. Sometimes both players play special teams, in this case it comes down to who is more productive.

Tonight when the Seattle Seahawks visit Oakland-Alameda Coliseum, fix your eyes upon the special teams units. The players that standout on special teams will likely have an edge when the roster is cut from 75 to 53. 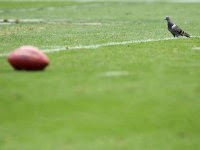 Here are a few position battles that could come down to special teams play.

Analysis: Cartwight plays special teams and has been the lead kick returner so far. However, he hasn’t exactly grabbed the kick return job and Bennett is clearly the superior running back. With the injury to Bush and McFadden’s history of injuries there is a very good chance both of these players stick. This is one rare circumstance that special teams may not ultimately decide who is on the roster for the whole season.

Analysis: Williams has long been considered a scholarship player, but in reality has turned himself into a very good special teams player. The problem is fifth round draft selection Goethel looks to be a special team stud and more valuable backup linebacker with room to grow. Groves not only will play special teams, but he can also play defensive end. I believe Groves will make the roster. Look for Goethel to get the nod over Williams if the Raiders don’t want to carry that many linebackers. I have a feeling with the special teams woes that there is a chance all could make the final roster even with a crowded group of linebackers.

Analysis: Eugene is a good special teams player and serviceable backup safety. Brown just always seems to be around the ball. Another tough decision for the Raiders. If the Raiders think Brown will pass through waivers and could be stuck on the practice squad, you could see Eugene get the nod for his special teams ability. Again, there is a chance the Raiders go with five safeties, not willing to lose the special teams or the rookie.

Analysis: Three of these players will make the roster. Ford and Higgins are probably nearly in, and between the other three Watkins plays a special teams as a non-returner and may be best receiver of the group.

All others:
Will try to catch on elsewhere or with the practice squad.