Step Up Your Game: Richard Seymour

July 27, 2010
Fourth in a series analyzing players that need to step up their game in 2010 for the Raiders to be a playoff team.

Richard Seymour is the Raiders’ Exclusive Franchise Player. No long-term contract was agreed upon before the deadline last Thursday, so Seymour will play this season under the franchise tag. 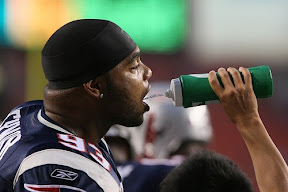 The Raiders gave up a 2011 first-round draft selection for Seymour last year. In his first full season with the Raiders, he recorded 47 tackles and four sacks.

Seymour needs to take a more active leadership role and improve upon his four sack performance in 2010.

Now over 30, Seymour needs to prove he can still be effective or the Raiders may be less inclined to give Seymour the lucrative long-term extension he covets next season.

Increased production from Seymour will not only lead to more money in his pocket, but potentially more success for a Raiders team craving it for seven seasons.

The last thing the Raiders can afford from Seymour is any degradation in his play. The Raiders are also hoping the additions of Lamarr Houston and John Henderson, will allow Seymour to play more snaps outside.

Where and how Seymour is used could be something to watch during training camp. Watch for how the Raiders rotate the defensive lineman and pay special attention to how much Seymour plays inside.

Seymour has been, by most reports, a lead by example type of guy. Looks for him to continue that, but don’t be surprised if Seymour takes a more vocal leadership position with the Raiders.

With players arriving for training camp, Richard Seymour rode the bus with the rookies and undrafted players and was off the bus. If it wasn’t orchestrated by the Raiders PR department, this is an excellent demonstration of leadership by Seymour.

The Raiders need Seymour at his best in 2010. A full training camp in Napa and a new defensive line coach could go a long way to helping Seymour and the rest of the defensive line reach their goals.

Step up your game Richard Seymour, because the Raiders know you can do more and they need you to do more to make the playoffs.