Step Up Your Game: Thomas Howard

July 26, 2010
Third in a series analyzing players on the 2010 Raiders that need to step up their game for the Raiders to become a playoff team.

The strength of the starting linebackers in 2009 was certainly their ability to play the pass. Thomas Howard, Kirk Morrison and Ricky Brown were all more adept at playing the pass than they were at playing the run. 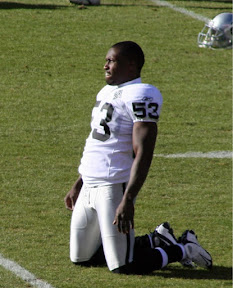 
Flash-forward to 2010 and the starting linebackers are Trevor Scott, Rolando McClain and Kamerion Wimbley. Three new linebackers, two pass rushers and one rookie.

The drastic change comes on the heels of yet another poor year stopping the run. While some of that can certainly be placed upon the interior line play, the one constant had been Morrison and Howard. Morrison was shipped out of town, but Howard remains with an uncertain roll.

The Raiders have a totally different question surrounding the linebackers in 2010. Can they cover?

Scott, a converted defensive end, was effective rushing the passer and stopping the run last season, but still has a ways to go in coverage. Wimbley is also playing a new position. The college defensive end turned 3-4 outside linebacker will play the strong-side linebacker position for the Raiders. Coupled with the fact that McClain’s only perceived weakness was playing the pass and the Raiders have completely flipped the position upside down.

Howard finds himself competing for the job as a nickel linebacker. Ricky Brown and Quentin Groves will also figure in, although Groves has similar issues covering the pass. Howard’s struggles were not apparent last season, but the coaches saw enough on film to move him from the weak-side to the strong-side and basically replace him in the offseason.

With the stated liabilities of the other linebackers against the pass, Howard will need to embrace his new role and thrive covering the pass when spelling Scott and Wimbley.

The revamped core of linebackers will need to prove they can cover to stay on the field, while Howard will get on the field for his coverage abilities.

Howard is the rare physical specimen that could force his way into a starter roll if he can stop the run. He will be relied upon to play the pass well.

Step up your game Thomas Howard, the Raiders defense needs you to cover up their liabilities, as they will yours.